Tough topic, with the SCOTUS overturning Roe vs Wade,  but here's the deal: Women's health and rights are at risk! Healthcare for Women’s bodies is complex and expensive, having sound insurance coverage is ideal…when that is not available NH Family Planning Program (NHFPP) has been there for women of all ages for decades. It has been a necessary option for post pubescent girls to menopausal women, for birth control options, prenatal care, childcare, to breast exams and so much in between. However in 2022, legislation has been passed to drastically cut the budget for NHFPP!

Making matters worse, NH is also the ONLY  New England state where women's reproductive rights are non-protected!! What does that say about the laws that are being passed by our representatives in Concord?? Creating bans and laws that incapacitate a women's right to choose for any given reason is a direct assault on sisters, daughters, mothers and grandmothers. Caring for women with funding programs for all demographics gives women the dignity to make informed decisions about their body with medical providers privately without the interference of legislation that is based on someone else’s imposed belief or agenda.

Here’s Where We Stand:

In 2022, house bill HB 1609 was passed allowing exceptions for rape, incest and “fetal abnormalities incompatible with life” after 24 weeks.
With the Supreme Court doing away with Roe v Wade, bills to codify the right to abortion in New Hampshire (CACR 18, HB 1674, SB 436) did not pass.
New Hampshire is the only state in New England where the right to an abortion is not protected.
At the same time, at least 5 bills to ban abortion were introduced.

Although these did not pass, the right-wing and Christian nationalist members of the legislature strongly indicate that they will continue to push for the total ban of abortion from time of conception eliminating reproductive autonomy for women in New Hampshire.
The house bills that were recently defeated:

HB 233: Establishing a committee to study the right of any infant born alive to medically appropriate and reasonable care and treatment
HB 622: Protecting nascent human life as a reasonable and valid state interest. Establishes criminal penalties and disciplinary action for persons who perform abortions in this state to terminate the life of a viable fetus, except when by not doing so there is a clear and present danger to the life or health of the mother.
HB 1080: (Restrict access to healthcare by allowing any single person working in a health care setting, including pharmacies, to refuse to perform abortions or sell contraception if it violates their conscience)
HB 1181: Allowing the biological father of an unborn child to petition the court for in injunction prohibiting the biological mother from having an abortion
HB 1477: Prohibiting abortions after detection of fetal heartbeat

I will vote for budgets that support reproductive healthcare

I will vote to repeal the New Hampshire abortion ban

I will oppose any legislation that seeks to limit reproductive liberties 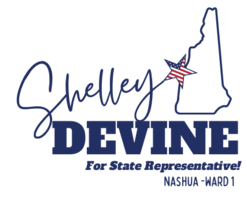 My Position on Key Topics

As of 2020, our youth are at risk! Firearm related injuries are the leading cause of death for our country’s youth ages 1 thru 19 years of age (2nd being automobile accidents and 3rd being drugs) That’s a shocking statistic when you think of reasonable gun safety laws that have been vetoed by our current governor. If Washington can reach a bipartisan compromise on guns, then we should be able to do that here in the Granite State. When it comes to critical issues concerning gun safety it is our responsibility to be good stewards for our kids and communities. It’s necessary to examine, refine and implement wise laws that do not undermine the public safety, nor law enforcement officials in the process as well as maintain the 2nd amendment right of law abiding citizens.

HB1178 signed on June 29, 2022 by Governor Sununu prohibits the state from enforcing any federal statute, regulation, or Presidential Executive Order that restricts or regulates the right of the people to keep and bear arms.

Under HB 1178, state law enforcement agencies would not be able to help the ATF or FBI arrest someone who had modified their firearm with a bump stock, unless other laws were broken, despite a Trump administration law banning bump stocks. State law enforcement agencies would also be inhibited from enforcing Biden administration regulations including one passed in January that requires gun storage devices to be compatible with the firearms they are sold with.

Public Education in New Hampshire is at risk and property taxes will be effected under the current legislation.

194-F: Education Freedom Accounts passed in 2020, are expected to dole out a whopping $8.1 million in state funds this fiscal year alone for approximately 1600 students across the Granite State. AND because of the demand the state had to source an out of state management company in Florida to handle the distribution of funds that receives a 10% service charge. What participants don’t realize is that in the long run the state has made provisions to downshift this cost to local school districts which could result in increased property taxes. For the short term vouchers that might seem enticing, but for the long term for Nashua residents it could become an unforeseen tax burden.

When reading 194-F it is very clear that the Republican effort to expand privatization across the state also wants the schools vouchers to be directly funded by local school district budgets. What that means is if your son or daughter go to Nashua High School North, Broad Street Elementary School or Birch Hill Elementary School the tax dollars that should be allocated to those schools will be instead going to pay for homeschooling, private school tuition and other education-related costs for students who registered for Education Freedom Accounts! AND this could lead to an increase in property taxes to make up the difference lost to public schools.

But Here’s the Real Kicker:

In just the past year the State has downshifted the cost for public education to local property tax payers by more than $500 million, further squeezing working families in property poor communities which need to increase property taxes to make up the difference. 79% of NH students live in towns with below average property values. Since the state provides only about 1/3 of the actual cost of educating our students these communities face increasing property tax bills.

I will support the “NH School Funding Fairness Project”. Details about the Project, your taxes and school funding can be found here - https://fairfundingnh.org/